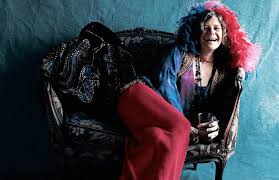 
Janis Joplin became famous because of her incredible singing voice. That’s the essence of her appeal. She had no stylists or wardrobe assistants, no dry ice machines or back-up dancers, no lip syncing. That stuff doesn’t keep you around 50 years after you left...No, just a few guitars, drums, maybe a keyboard...and Janis. That’s it.

Don’t let her early death distract you from the raw talent – and her talent was as raw as it gets. She knew how to sell a song, the same way Sinatra did or Judy Garland or Aretha Franklin or any of the greats. Listen to her sing Me and Bobby McGee and you’ll hear it. ( It’s the phrasing, it’s the pitch control, it’s that cosmic alchemy of spirit, personality, experience, physicality, hope, defeat, love and loathing.

She was strong but could seem weak, a leader that followed others, laughed with a cackle but sad beyond belief. She needed heavy drugs to do what? Calm a restless soul? Obliterate despair? Help her to remember to forget? No answers, only convenient asides. Perhaps she wished for escape from her self-made cell. Maybe freedom is just another word for nothing left to lose, maybe not, but Janis never played with a strong hand.

She molded her appearance to coincide with her persona – all feathered boas and junk jewelry and owl sunglasses and psychedelic cars. But a persona is, well, just a persona.

There she is jamming with sex machine Tom Jones or rapping with the impossibly beautiful Rachel Welch. Few other celeb hippies had the guts – and brains - to shake off the tie-dye and patchouli and just follow their hearts.

Like Brian Jones, Jimi Hendrix and Jim Morrison, Janis Joplin did not commit suicide and wasn’t fated to die young. That’s morbid and sloppy. It was a series of dark, unresolved private issues and plain bad luck that led her away. That said, those who knew her well would tell tales, years after her demise, of her darkness and isolation.

They still find it hard to say farewell to Janis – because she always seems to be around, just one head-thrown-back-shattering-cry-for-love that swells it all back to life one more time.

“The first time I heard Janis Joplin’s version [of Me and Bobby McGee] was right after she died. Paul Rothchild, her producer, asked me to stop by his office and listen to this thing she had cut. Afterwards, I walked all over L.A., just in tears. I couldn’t listen to the song without really breaking up. So when I came back to Nashville, I went into the Combine [Publishing] building late at night, and I played it over and over again, so I could get used to it without breaking up.” - Kris Kristofferson