Veruschka: An unwavering sense of purpose 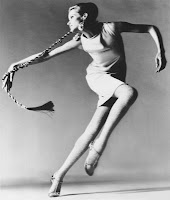 1944, East Prussia. Along with a small group of fellow heroes, Heinrich Gräfin von Lehndorff-Steinort attempts to assassinate Adolf Hitler using explosives packed in a briefcase. The assassination fails and Hitler retaliates a few days later by having Heinrich — and his brethren — murdered.

That's our back story.

The ancient Greeks believed there are three aspects to beauty: symmetry, proportion, and harmony. But that analysis doesn't touch on the moment of inception. Can beauty be borne of tragedy? Could such circumstances hyper-inflate the Greek triad?

We all know that beauty is a lot more than strategic bone structure and straight teeth. We know that there’s a mystery to it, that it’s somehow intertwined with personality, with a particular attitude toward Life — and Death. We all know that.

And we know that Death and Sex are close friends. (That's the thin mystery of James Bond). They need each other. Perhaps the relationship seems abusive, at least while you’re hidden, memorizing their slow movements through a window. But they’re opposites and each finds the other bewitching and dark and dangerous.

Beauty and Life are what remains when Death and Sex leave the party. Beauty is dumb fun. Life lies, all the time, without exception, to every one.

When Death ends up with Beauty, you get fallen angels — such as Vera Gräfin von Lehndorff-Steinort, our Veruschka, one of the top 1960’s models.

After Heinrich’s murder, his daughters and wife passed the war in labor camps. They were lucky to survive. 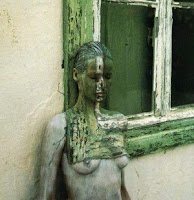 Richard Avedon called her the most beautiful woman in the world…but you know those photographer types…By 1966, when she appeared in Antonioni’s ‘Blow Up’ (in the most celebrated/imitated photographer – model sequence ever filmed) she had hit the big time.

Watch that sequence today. She had been sick and was too skinny and weak. Are those eyes dead or disengaged, jaded beyond salvation or in hiding? Maybe beauty gets its strength from the soul: it’s a direct current wired straight through the eyes. You rarely see Veruschka with sunglasses.

That’s her quality, deep-cave inscrutability that finds light even under coats of body paint, an art form she developed long before it was an art form. (Inscrutable for sure: What's she doing at James Bond's gambling table in 'Casino Royale'?) Veruschka was the first to understand that models need background a lot more than background needs models…so she became the background, disguised and melding her thin form, naked and still, a child resting, pushed out of its cloudy nest.

Perhaps it was her defiance, born of that Death-Sex alchemy, so different from the daffodil-swinging marianne-faithfuls of Carnaby Street, a toughness that somehow redefined obvious vulnerability, that lightly lampooned Beauty, that
made Sex seem more of a challenge than a pastime.

Her father was brave, not a transferable quality, but one that can be attained through a deliberate, unwavering sense of purpose, be it facing death… or the cold dead glass of a camera.
Posted by I. M. Clarke at 9:30:00 PM
Labels: #1960smodels, #antonioni, #blowup, #bodypaint, #davidhemmings, #fashion, #HeinrichGräfinvo LehndorffSteinort, #model, #moviestars, #Veruschka

Tara Browne: a little life rounded with a sleep

LONDON, Dec 18 (1966) - Tara Browne, 21-year-old heir to the Guinness brewery fortune and a leader of London’s “mod” social set, was killed early today when his sportscar smashed into a parked truck in the South Kensington district.

There are some people whose purpose in life — in a cultural sense — is to offer context to the lives of their contemporaries. They are rarely catalysts for action; rather, they provide a kind of mood music or a subtext for movement. Tara Browne (1945-1966) was like that.

The short, happy life of Tara Browne survives in print and pictures for what he represents, not what he did (although his twenty-one years were not without merit and accomplishment). And what he represents is that burst of color and noise and fashion that ran amok through the Carnaby district of London, from about 1964 – 1970, give or take.

﻿﻿
Perhaps he represents a little more. By its very nature, ‘Pop’ doesn’t do anything, doesn’t feed the hungry or house the poor. It just is, like Tara. No creativity required, no mesmeric eloquence or moon-lit beauty: you just have to be there in the right place in the right clothes. That’s it – but it’s not that easy because we only know where there is in retrospect. Tara seemed to know.

Browne  spooned some of his inheritance into a fashion store called Dandy (on King’s Road) which sold clothes made by his tailoring business. He also had a failing marriage, kids and girlfriends.

﻿
He was a little bit Edie Sedgwick, a tiny touch of Porfirio Rubirosa, a dash of David Bailey, a pinch of Sir Guy Grand — with a lime wedge of poor-little-rich-kid. He was well liked. When Tara died, John Lennon wrote about it in ‘A Day in the Life’ and the Pretty Things recorded the more literal Death Of A Socialite’…Every little bit counts.

Our revels now are ended. These our actors,
As I foretold you, were all spirits and
Are melted into air, into thin air…
We are such stuff
As dreams are made on, and our little life
Is rounded with a sleep.

It’s been suggested that when Shakespeare wrote those words — almost the final words he ever wrote — he was saying that all art is ephemeral, nothing more than thin air. He was wrong of course (as his own longevity proves — and he knew in his heart): art, just like a person, endures if it — or they — touches the Truth.