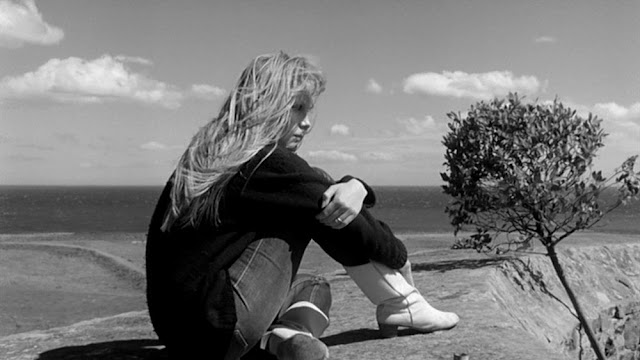 Considering the extent of Catherine Deneuve's fame, few people know that she had an older sister: her name was Françoise Dorléac - and she was just as beautiful as her famous soeur. Poor Françoise was to have a glamorous, brief life, making just a handful of films before her untimely death in 1967, gone at age 25 in a car crash.

I didn't know any of this until I worked with a guy named Philippe Reux: we were partnered as 'on location' bodyguards for the film star Jean Claude Van Damme during the production of a movie called 'Maximum Risk', partly filmed in Toronto during a bitter winter.

Attempting to explain how I became Jean Claude Van Damme's lowly bodyguard occasions dark memories and general illegalities. Suffice it to say that for two weeks, it was my well-paid position to make sure that Mr. Van Damme was not harassed by his fans. I had a very quiet time.

Philippe was from Marseille, about sixty years old, white hair in a short pony tail, intensely skinny, once handsome with that peculiar Mediterranean tone of tan - light chocolate/more orange than gold. From certain angles he looked a lot like Keith Richards, especially in the early morning. Philippe chain-smoked, was excitable and chronically irritated. When we were introduced on the first day of our assignment, he just stared at me, wincing like he bit a lemon, as if he couldn't believe he was on a security detail with a man who had never killed anyone.

Never once, in twelve days of work, did Philippe ask me about myself: in fact, part of his attraction was a self-engrossment so powerful that he barely needed to eat. I doubt if he ever knew my name.

By the second day, Philippe was more expansive, mainly because I gave him cigarettes and lobbed him banal questions. He told me that Canada was boring, and that he was "a party man. I can party. All the time. I never stop. There is no point." He really did speak like that.

He had spent all of his life on movie sets in low-end jobs: filling a star's coffee cup, walking a producer's dog - it didn't matter to Philippe; he was there for the party. It was a haphazard career that began in 1960 on the set of Jean-Luc Godard's 'A bout de souffle' and had never really stopped. He went from film to film carrying nothing more than his toothbrush and wallet.

If you asked Philippe, 'what was Godard like?' or 'how was Brando on the set of Last Tango?' he would either just walk away or give you an elliptical answer like "A film. Just chemicals. Nothing is important."

In fact, for a man who had spent his life on movie sets, Philippe had no interest in the medium whatsoever.

When I told him that François Truffaut was an important director and well-known in Canada, he reacted with shock, as if I had mentioned that his own brother was on the FBI's Most Wanted list. Then he immediately lost interest in the whole thing. Truly, he seemed incapable of sustaining interest in anything that wasn't attached to his body. I had come to accept him as a condescending extraterrestrial: it didn't matter where he was on planet Earth because it needed him more than he needed it.

During our last day of work we were stationed at a side entrance of Toronto's Old City Hall, down at the bottom steps, right behind the Eaton Centre. Van Damme was inside the Hall, filming a 'prison scene'. We smoked, leaning against Van Damme's 'personal trailer' - that was never more than a few hundred meters from the great man himself.

Time crawled by. Just to raise Philippe's irritability level, I asked what in life was important to him. He squinted at me, suspicious, as if I was laying a trap. I wasn't. I just wanted to know what kept him going. He seemed so perfectly hollow.

But for the first time, Philippe looked pensive.

It had been snowing and Philippe, who wasn't dressed for a Canadian winter, started to smack his hands together, scowling at the sky, taking it all personally.

He told me that he liked to travel and that he liked to look at beautiful women - and the best way to combine both pursuits was to work in the film business. I asked him if he pursued the starlets. He replied that it wasn't necessary; that actresses were insecure and vulnerable to flattery - and sexual conquest under such conditions is dull and void of challenge. (He really did say things like that). But beauty was another thing, he said - now that was worth pursuing.

"Okay," I said, "who is the most beautiful woman you've ever seen?"

"Do you know the name 'Françoise Dorléac'?'

"Vaguely. Wasn't she in that Polanski movie about some old guy who...."

Philippe cut me off with a sharp wave of his hand. Evidently, I had bored him with just over ten words.

"She was talented," he said. "Very beautiful. Her sister was Catherine Deneuve. She died. 1967. Twenty-five years old. We worked on 'Cul-de-Sac'. We spoke. We were young. She had this little dog. I can remember her profile, her face, you know? You cannot be that close to beauty and be unchanged, undamaged. Died a few months later. Françoise. The most spectacular of them all." Philippe looked drained. "Beauty is a wonderful accident, you get it? Something in me arrived at the end."

Philippe's eyes were frozen on an object moving farther away. I was dumbfounded that he had a capacity for sentimentality. For a moment he even looked different.

Some of the crew was beginning to exit the set, which meant that Jean Claude would soon require our tough-guy services to protect him against the surging, nonexistent mob of frenzied fans. Philippe emerged from his reverie. His face tightened and he slowly rubbed his hands together.

We began to walk up the courthouse steps to the movie set. Philippe suddenly turned to me and said, "Never stop. Always another party. You get it?" As we reached the landing, Van Damme himself rushed down, petit and feline, leapt up into his trailer and snapped shut the door.