Brigitte Bardot: The Attraction of Detachment

Brigitte Bardot had a talent for beauty.  But it wasn’t the ridiculously perfect face of Catherine Deneuve. Or the seductive, interwoven curves of Raquel Welch. Bardot’s beauty was never cheekbone-dependent.

Indeed, she had an attitude that somehow forced her appearance to the wings, an insouciance that made her surprisingly relevant to the 1960s, where her sex-symbol sisters seemed increasingly absurd. It was a rebel streak, not a come-hither. The slight overbite. The updo cascade of blondeness. And a detachment that didn’t stop with the people in her room, but included everyone.

You just knew she was going to handle this film gig like last night’s lover, with a soft adieu and a pout and then out the door; that she didn’t care about character nuance or plot development.

It was her pilgrim spirit, an easy laughter than had more to with exits than entrances. You followed her into the next scene just to see if she showed up.

And then she left. No facelifts. No excuses. Seeking the 60s sunshine all golden over Cote d'Azur, alone with animals and others without guile. 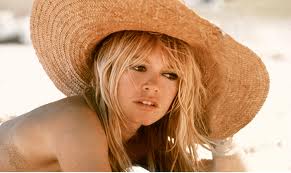 What to make of her oeuvre? All the insubstantial films. The wasted time. Doesn't matter. She's not listening, caring as much about them as she does for you, held somewhere between a Gallic shrug and a seductive playfulness that comes so easily to those with no past.